I’m back from vacation and although it’s always sad to see it end, I’m glad to be back to work and blogging! May was a really busy month for me as I was rushing to finish my 4th renovation project, which was also featured on Design Sponge, hence the lateness of this newsletter. But better late then never, so let’s review the Toronto real estate numbers for May as well as the first 14 days of June 2012. 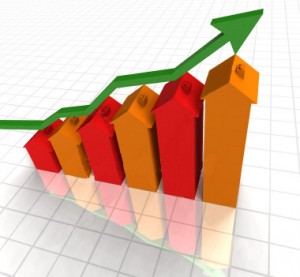 The biggest sales growth, believe it or not, was in the “905” area. The sales amounted to 6,720 transactions for the month of May 2012, which is a substantial amount, especially when compared to the “416” area which came in at 4,130 transactions for May 2012. There definitely was a shift in May as Toronto prices continued to rise higher and higher, making the “905” look more affordable and better bang for your buck in terms of lot and home size. Also, a recent poll suggested that not only have the lower prices pushed the attention and shift to the “905” region, but the Toronto Land Transfer tax has buyers looking outside of Toronto, said TREB president Richard Silver. You can send a big “thank you” to our mayor Rob Ford, who is still yet to abolish this tax as he promised in his campaign.

Another interesting piece of news from this report was that listings were up substantially when compared to May 2011. We haven’t really seen this in the Toronto real estate market for almost 2 years now! Listings rose by more then 20% to 19,177 when compared to a year-over-year basis, said Jason Mercer, TREB’s senior manager of market analysis. If new listings continue to grow at this pace, the remaining half of the year will see prices at a more moderate growth rate, which is great news for buyers!

Here’s a video with further analysis for the May 2012 market and the remaining year:

We are not done yet! Now that we’re up to speed on the May Toronto real estate market numbers, let’s look at the numbers during the first 14 days of June 2012 from TREB’s report:

Listings continued to rise, a trend we observed in May and were up by 16% to 8,382 when compared on a year-over-year basis. What does this mean for the Toronto real estate market going into the second half of the year? Will prices finally moderate after almost 2 years of exceptional price growth and low inventory? At this pace, that will be the case, giving buyers more variety and less pressure. Jason Mercer, TREB’s senior manager of market analysis said the following:

“The annual rate of price growth remains very high in the GTA. Increased listings will result in more balanced market conditions over the next year, but it will take some time before price growth will moderate to a more sustainable pace. Right now, months of inventory remains very low from a historic perspective and will likely not climb back to the pre-recession norm until 2013”

Definitely some food for thought, and definitely not anywhere near the doom and gloom the media has been spewing for the last year. The pressure on Toronto prices and inventory will be further pushed by our beloved Toronto Land Transfer Tax, which I will make mention of, once again. A recent poll suggested that 3/4  of people in Toronto and surrounding “905” areas who are planning to move in the next 2 years said they would be more enticed to move outside of the Toronto area due to the extra associated costs with the Toronto Land Transfer Tax, said TREB president, Richard Silver. Do you agree? Are you one of the 3/4 of people in the same boat? Or it is worth it to pay a few thousand dollars more in a real estate transaction for the convenience of living closer to work, the arts, entertainment and culture that Toronto has to offer versus wasting your time and gas in a car traveling 2 hours on average each day. I know my answer is hell ya, but what about you?

Well, that’s all folks, let me know your thoughts!